The hills are alive with the color green. And the fields too. Now that the rains have finally arrived here in the central mountains of Mexico, the brown, dormant earth has woken up and erupted in tufts of green. Everywhere you look, except for the rocky outcrops and ravines, is covered in green.

From my window seat on the Primera Plus bus from San Miguel de Allende to the capital city Guanajuato the other day, I could see, when the bus drew close enough, green sprouts emerging from the fields’ vast, tidy brown furrows. Elsewhere, from a distance, I could see that the corn fields – to paraphrase a line from the show “Oklahoma!” – were as high as an elephant’s knee: 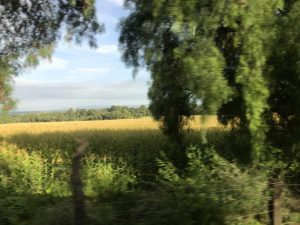 Scenes like this are thrilling to me. They bring back vivid memories of my years in southern Africa when I was in my mid-twenties, working at a weekly farming magazine in then-Salisbury, Rhodesia, now Harare, Zimbabwe. This was more than fifty years ago, at a time when Rhodesia was a breadbasket for Africa.

At that time, while visiting the outlying farms from my office in the capital, I fell in love with the sight of chocolatey soil, neatly furrowed fields, and healthy, hope-filled green plants reaching for the sun, as far as the eye could see.

While others on the bus to Guanajuato dozed or communed with their smartphones, I was glued to the passing verdant vista, taking too many blurry photos of Mexico’s breathtakingly beautiful, undulating mountainous middle, now dressed all in green: 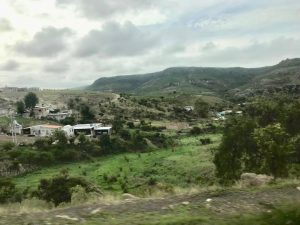 Perhaps if I’d been raised on a farm or a ranch, I’d find such scenes ho-hum. But growing up in northern New Jersey, in the New York Metropolitan Area, and having lived in a studio apartment on the fifth floor of an Upper West Side building in New York City for two decades, the sight of immense fields of green still, after all these years, excites me: 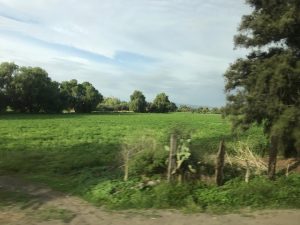 But these, I realize, as I practically press my nose against the bus’s window pane, are more than pretty scenes. Agriculture is vital to Mexico’s economy.

According to Choices Magazine, a publication of AAEA (Agricultural & Applied Economics Association), Mexico is a major global producer and exporter of agricultural products, capturing a significant share of the total world exports of: citrus and melons, tomatoes, cucumbers, and tropical fruit, including pineapples, mangoes, avocados, and guavas. “The agriculture and food sector is one of the main engines of Mexico’s rural economy, representing 3.3% of its national gross domestic product.” (See below for a link to the full article if this interests you.)

As for the fields of corn I saw along the way to Guanajuato, I thought of the meaning this product has for the Mexican people. In Mexico corn is not only a commodity, it is something deeply rooted in the country’s culture and heritage and has been for over ten thousand years. In fact, Mexicans often refer to themselves as “children of the corn,” descendants of those whose religious beliefs included three corn gods. A close look will show that corn cobs appear throughout ancient – as well as current — Mexican art:

And how can we forget Mexican food? Corn forms the basis of the country’s diet. I learned that more than six hundred traditional Mexican dishes contain corn. And a Mexican friend told me recently that the average Mexican adult here eats no less than six corn tortillas at the family’s main meal each day.

Unlike that of the U.S., Mexico’s paper currency is not uniformly green. The 100-peso note, for example — all that I needed to take this beautiful bus trip — comes in a golden-yellow color and features a corn cob in the corner. So, it seems to me, metaphorically speaking, for Mexico maize is an everlasting currency; corn is more than just green. 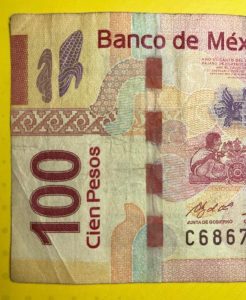 * For more information on Mexico’s agricultural sector, go to: