This week’s life adventure involved a visit to the Emergency Room, my first ever. Normally, I do everything in my power to avoid doctors and hospitals, believing passionately as I do in aggressive, proactive preventive measures to stay healthy. But this week I realized, not for the first time, that professional medical assistance is sometimes inescapable.

Last Friday I fell ill from who-knows-what — the kind of ill that makes death seem like a pleasant alternative. It felt like malaria, which I’ve had once: a roller-coaster of hot sweats and cold shivers, a head that feels like it’s about to explode all over the room, the inability to stand – or eat or drink or sleep or, in general, function.

So when my duena (landlady) came home from wherever she’d been all day, and I told her what was what, she swung into action, being the motherly Mexican woman she is. She phoned a woman-doctor friend of hers, described my symptoms to her, and was told to take me to an Emergency Room right away. So off we went in my duena’s car.

The first ER we tried, at the general hospital, was overwhelmed at that moment due to a major automobile accident involving multiple victims. So my dear duena kept driving, through San Miguel’s darkening streets and outlying highways, to find other options. Finally, we found a small, private hospital that looked promising, even welcoming. 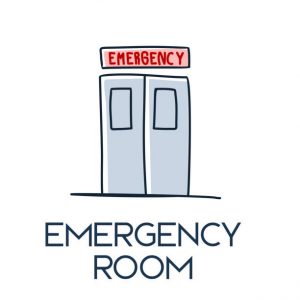 And welcome me they did. I was whisked in, put in a wheelchair, and treated like a princess in a palanquin, while my duena waited in the lobby. I seemed to be their only patient that evening, and everyone appeared happy to come to my aid.

“Do you speak Spanish?” the lovely young nurse asked me, as she began taking my vitals.

“Un pequeño” (a little), I said, explaining that I do best when Spanish conversations are conducted “despacio” (slowly). Fast Spanish – the kind that most Mexicans speak — flies right over my head, I told her, using both words and hand gestures to make my point.

She smiled and spoke gently and slowly to me.

Then seemingly out of nowhere (I was still feeling sick and dizzy and having trouble focusing) a not very tall but very classically dark-and-handsome young man in green scrubs arrived by my side and introduced himself as Doctor Diego. He, too, spoke no English.

I tried my best to follow what he was saying, but I was distracted by his good looks. What a beautiful creature, I thought to myself, muy guapo! Which made me feel surprisingly alive and well.

I looked up at him from the wheelchair, smiled into his movie-star-worthy cara (face), nodded, and repeated “Si” to everything he said. Literally and figuratively, I put myself in his able hands. My innate trust issues suddenly vanished. I was up for whatever he wanted to do with or for me. “Si, doctor.” I’m yours.

He put me on a drip, through which the ER nurse, Katy, administered medications – for the pain, nausea, and so on – and took blood to be analyzed. He stood by my hospital bed and caringly asked me questions, such as family medical history and allergies, then listened patiently as I answered him in splintered Spanish, all the while patting his arm with my free hand.

He must have been no more than thirty – younger than my grandson – but I found myself falling in love. Don’t leave me, a twenty-five-year-old voice in my heart was whispering to him through my seventy-seven-year-old eyes. Was this malaria-like illness making me delusional?

By this time, it was nearing midnight, and I sensed I wasn’t going anywhere.

“We’ll be keeping you overnight, for observation,” I think he said in Spanish.

Really? I thought. That’s fine with me! But all I could say was “Si, doctor.”

The habitation (room) they found for me upstairs had a large, comfortable sofa in it, where my duena spent the night. Here in Mexico, I learned, hospital patients must be accompanied by a close friend or family member at all times. My duena says we are family.

I was dozing off when Doctor Guapo appeared in this room, by this hospital bed, where I was tethered by tubes to the drip on my left and an arm cuff on my right. He spoke with me as if he had nothing better to do, nowhere better to go. From what I could grasp, he was going off duty, and he wanted to see how I was doing before he left. He explained that he’d like me to stay another day so he could call in a specialist to examine me; but if I chose to, I could go home in the morning. I chose the latter.

So the root cause of this ER episode, other than severe dehydration, remains something of a mystery. But one thing is clear to me: Deep down, thanks to Doctor Guapo, I know my heart is still young and alive.