Last month my friend Colleen and I went on the first of what we hoped would become a long string of fun and affordable bus adventures here in San Miguel de Allende. This week we went on our second. (To read about our first adventure, go to: www.bonnieleeblack.com/blog/an-eight-peso-adventure/ . To learn about the second, please keep reading….)

This time around we knew where we wanted to go – the small town of Atotonilco, eight miles northwest of San Miguel, which, along with San Miguel itself, is a designated UNESCO World Heritage Site. Dominating Atotonilco is the wondrous 18th century church complex, Sanctuary of Atotonilco (Santuario de Jesús Nazareno de Atotonilco), which remains a place of worship and spiritual retreat to this day, attracting thousands of visitors.

So Colleen and I decided to be among those visitors. We caught the SMA city bus (Ruta VII), clearly marked “Atotonilco” on its windshield, on Calzada de La Luz, near Animas (in front of house number 9) at about noon on Wednesday. The fare was 30 pesos ($1.44 USD), and the trip’s duration was under 30 minutes. Everyone on board was fully masked. The day was beautiful, and the view of the countryside glorious.

Here are some highlights from our afternoon adventure. If you haven’t yet been to Atotonilco, do go if you can. If you can’t, I’m hoping these photos might magically take you there: 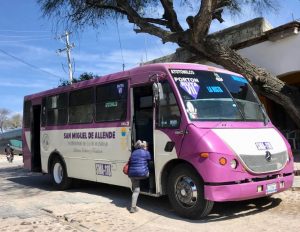 Here in San Miguel de Allende, Mexico, the city buses are large, sturdy (primarily Mercedes-Benz), clean, and well maintained. Most cost only 8 pesos, or $0.38 USD per ride. The bus to Atotonilco (Ruta VII), however, costs 30 pesos, or $1.44 USD, one-way, and ours didn’t make other stops. 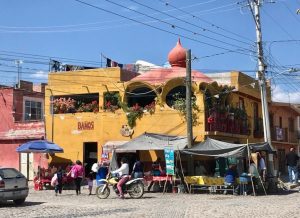 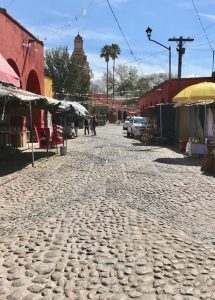 The bus let everyone off at its destination, the town of Atotonilco, across from this colorful grocery store (pictured above), and only a short walk down the main, market-lined street to the magnificent Sanctuary: 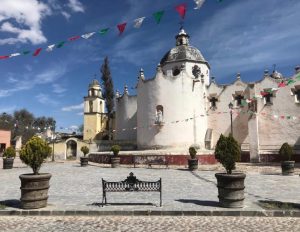 The Atotonilco area was considered sacred even before the arrival of the Spanish because of the hot mineral springs in the vicinity. The name Atotonilco is common in Mexico, especially here in the central highlands. The name comes from the Nahuatl language, meaning “place of hot waters.”  Today, the upscale La Gruta Hot Springs thermal spa is located nearby. 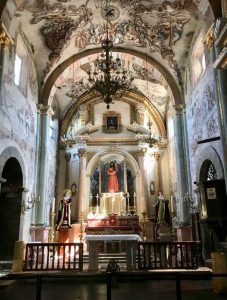 The main feature of the interior of the church complex is the rich Mexican Folk Baroque mural work that adorns the main nave and chapels. This mural work, which was done over a period of thirty years, has led the complex to be dubbed the “Sistine Chapel of Mexico.” 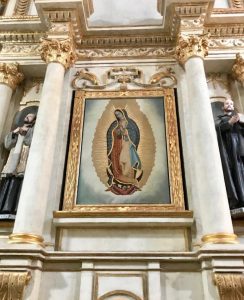 (Above:) One of the many marvelous pieces of art inside the church. This historical tidbit is from my favorite SMA guidebook, Robert de Gast’s The World of San Miguel de Allende: “On September 16, 1810, Father Miguel Hidalgo and Ignacio Allende and their ragtag army stopped at Atotonilco and fetched a banner with the image of the Virgin of Guadalupe, which became the standard for the army of the Independence Movement.” 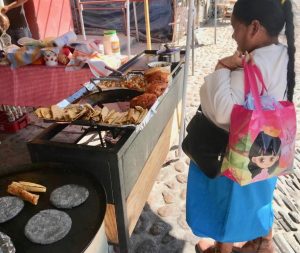 Before catching the bus to return to SMA, which left promptly at two o’clock, Colleen and I had a light lunch at a traditional open-air “café.” Cost? Ten pesos.