Today, November 25, is Thanksgiving Day (Día de Acción de Gracias) in the U.S., so I’d like to say to all my WOW readers around the world a great big “Gracias!” Thank you for being part of this beautiful, invisible golden web of connectedness that has helped sustain me for seven years. How else could I, an American expat in Mexico, have kept in touch with everyone on such a regular basis over these past years?

For me, enduring friendships are the bedrock of my being.  Those of us who cannot claim membership in a traditional “happy family” – and there are more of us than you might think – find our sense of “family” in friendship.

Each week when I write a new WOW post from my heart and send it off into cyberspace — like a message in a bottle thrown out to sea — I imagine my friends in far-off places reading it and in this way visiting with me.

There are Martyn and Melanie, friends from then-Salisbury, Rhodesia, circa 1970, who now live in Wales; Marie-Laure outside of Paris, France, who’s been a dear friend for nearly fifty years, after we met on a tennis court in Saint Martin in the Caribbean; historian Sandra in Kirriemuir, Scotland, whom I met in 2011 when I was doing research for my historical novel Jamie’s Muse there; Gigi in England, whom I’ve known since she was a little girl but who is now a grandmother; Amparo in Australia whom I’ve known since my Peace Corps days in Gabon (1996-98).

And many, many more – overseas, all across the States, as well as here now in San Miguel de Allende, Mexico. I am blessed with friendships, old and new, for which I am deeply thankful.

An acquaintance said to me recently, “You write your blog posts every week for yourself, don’t you? So it doesn’t really matter whether anyone reads them.” And I immediately wondered: Would you say to someone preparing Thanksgiving dinner, “You’re making this for yourself, aren’t you? So it won’t matter if no one shows up.”

No, these WOWs are for my extended “family,” made with love and care, in the hope that you  find what I serve to be tasty and nourishing. For myself, I write every day in my personal journal. That’s just a bowl of chicken soup.

So let’s pretend, on this Thanksgiving Day, that I’ve made my favorite winter-holiday tart for you for dessert. It’s too late for you to make it for your own Thanksgiving feast, but Christmas is just a month away. Here’s the recipe. It’s easy to make, and I have no doubt it will become one of your favorites as well:

[From my book Sweet Tarts for My Sweethearts: Stories and Recipes from a Culinary Career, published by Nighthawk Press in 2020:]

a pinch of salt

2)  Pour filling into prebaked tart shell and bake at 350 until set and golden, about 40-45 minutes.

Again, thank you – gracias! — for coming to my table. Every week when I write to you is Thanksgiving for me.

And a special gracias also to those WOW readers who made donations to ABBA House. (See my previous post for the backstory: www. bonnieleeblack.com/blog/ABBA-House/.) Thanks to your generous support we were able to buy many more skeins of yarn for our new knitting and crocheting project.

The last time we were there we found that the longer-term residents, many of whom had only just learned to knit or crochet, had begun making hats and scarves for the migrants who would be in transit, traveling north in these colder months. So the blessings are being passed along.

Here is a photo of one happy little learner, Tiffany, whose beautiful young mom, a double-amputee, is one of ABBA House’s long-term residents. Tiffany’s mom is learning to knit, so Tiffany wants to too: 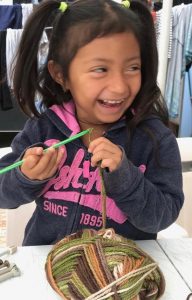