“Truth,” I used to say to my college English Comp students on the days I taught personal-essay writing, “is like a ginormous PIZZA.” That got their attention. Then I’d go on:

“All we can claim for ourselves as individuals is a tiny sliver of that big Truth. Personal essays can never even try to be the whole Truth; they can only honestly say, ‘This is my truth, this is my sliver, this is my point of view, this has been my experience, this is how I see things…’

“And in that way, as we read others’ personal essays, which may well be totally different from our own, and learn their true stories, we all can get that much closer to the huge, round Truth. We can learn from each other.”

With that as prologue, I’ll offer my thoughts and my point of view on the contentious subject of white supremacy in this personal-essay WOW post:

It’s been my experience and observation, having lived now for seventy-five years as a white American female, and having known or been related to many, many white, straight, privileged men, that the vast majority of those men (not all, by any means, just most) have considered — and may still consider — themselves to be superior beings.

Even the ones who pay lip service to equality, I’ve long observed, believe down deep that they themselves are of a higher order. They see themselves as bigger, stronger, smarter, better educated, richer, and (therefore) more powerful, and totally deserving of their superior status. The rest of us are beneath them; we are, to them, in varying degrees, “less than.”

Their world view, I’ve learned from knowing so many of them quite well, looks like a mountain range, and they are the kings of their mountains. Their ranking system looks something like this: 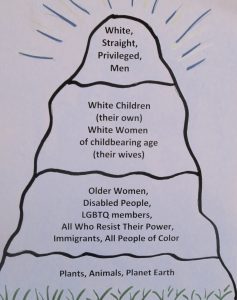 Black people in particular pose an enormous threat to such men because they (black people) have historically proved to be exceptionally strong and resilient human beings. In the eyes of these timorous kings-of-the-mountains, black people must be suppressed at all costs. Puny white men, dating back at least to the slaveholders in the antebellum South, are especially terrified of the strength of black men. They can no longer shackle them as slaves, of course, but they can and do readily lock them away behind bars and try to prevent them in every other possible way from advancing upward.

Sadly, the notion that white men were born to rule over the rest of us is very old and deeply entrenched in the West. Its genesis, I’d say, can be traced in large part to the Bible’s creation story.

In the first chapter of the first book, Genesis, God – depicted as an old white guy in the sky by Michelangelo on the ceiling of the Sistine Chapel – created man in His image and gave this man, this white man named Adam, “dominion over” everything and everyone else. Domination over others, then, has since become an integral part of too many white men’s misguided personal beliefs, believing that their right to supremacy is God-given.

What will it take to change this picture?

I’m not a poet, but I began to write a poem last week to express my whirling emotions during this time of great upheaval, when record-breaking numbers of peaceful protesters all over the world have been marching in the streets against inequality and injustice, galvanized by the recent murder of the black American, George Floyd, by a white police officer in Minneapolis:

What will it take

for the kings of the mountains —

having never missed a meal

nor wielded a hoe —

to descend from their thrones

and meet the people down below

Will it be gentle words of pleading?

Or their comrades’ severed heads

When and how will these injustices end? How can society flatten the curve of this mountain range of inequality? I don’t have the answers. But I feel strongly, as an insider, an older (and, I trust, by now wiser) white woman, that I must shine a light, tell my truth, raise some awareness, pose necessary questions.

I’d like to be hopeful, but I can’t say I am at the moment. Yes, the hundreds of thousands of protesters have been diverse – young, old, men, women, white, black, brown… — but will these outdoor exercises translate into permanent, positive social change after the cameras stop rolling?

Perhaps the young white men of my grandson’s generation will listen to the words of wise older women – old women like me who are wise to the ways of those older white men with their disingenuous poses and insincere promises — and think and behave differently than the privileged white men of previous generations.

Perhaps equality and justice for all will ultimately triumph after all. Perhaps. For everyone’s sake, we all must hope so and do all in our own power to effect this positive change.

And be sure to read Charles Blow’s recent NYTimes Opinion piece, “Allies, Don’t Fail Us Again,” for his powerful perspective on this issue: