The rains have resumed, and with them some flooding. If not in the streets, then at least in some old, fairly porous homes. San Miguel de Allende is, after all, an old, old, colonial city, and the heavy rains here in the central mountains of Mexico have a way of flowing in.

Take my bathroom, for instance. It has a tendency to leak and flood when it rains. Rain sprinkles through the brick ceiling and flows slowly down the walls. My towels and bath mats get drenched. I throw up my hands and report the issue to the very able management, and I’m assured the problem will be resolved “pronto” (soon).

I translate “pronto” to mean: as soon as rain is no longer in the forecast (which is to say, not in the near future) and the young man who is expert at painting such leaky roofs with sealant (which requires many hours of sunshine to dry) has an opening in his busy schedule. In the meantime, I’ve rigged up an umbrella over the toilet and moved most of the towels and bath mats to higher ground: 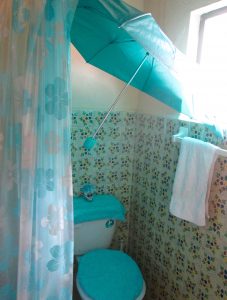 I do a quick reality check: This is Mexico. I am not a princess. I learned some of the mysteries of cultural adaptation in the Peace Corps in Africa twenty years ago. The pluses of life now in San Miguel far outweigh the minuses on a daily basis. I am a grateful — and legal — resident here.

Most of all, I know things could be much worse for me: I could be a refugee.

I’ve been thinking a lot about refugees lately, especially since seeing the brilliant 2017 documentary film by the exiled Chinese conceptual artist Ai Weiwei, “Human Flow,” last Saturday night with my friend and neighbor, Iris. This haunting film visits over twenty countries during the space of one year to expose the reality on the ground for these desperate men, women, and children who’ve fled their war-torn homelands, driven by the hope of finding asylum in another country, only to discover — in too many cases — razor wire at the other end.

Or, as one New York Times journalist poetically described it, “millions of refugees shipwrecked between the wasteland of home and the void of exile” (Vivian Yee, 8/9/18).

“‘Human Flow’ is a personal journey, an attempt to understand the conditions of humanity in our days. The film is made with deep belief in the value of human rights. In this time of uncertainty, we need more tolerance, compassion and trust for each other since we all are one. Otherwise, humanity will face an even bigger crisis.”

The film relates to Weiwei’s personal life in that he was forced out of Beijing with his family as a young child during China’s Cultural Revolution. As a result, he has been open about his own dehumanizing experience of living in a Chinese camp under terrible conditions.

Using various technologies – including drones, cameras, and iPhones – the film’s artistry is breathtaking. Weiwei’s camera lingers on scenes that come to resemble landscape paintings of ominous terrain, and his shots of individual refugees staring directly at the camera look like portraits of despair. We’re given time to see in those faces our shared humanity, as if looking into a mirror. We stare back and think, That could be me.

Ai Weiwei’s purpose in making this film, clearly, was not to offer easy solutions to this immense and heartbreaking humanitarian crisis but rather to raise consciousness, to open minds and hearts, and to inspire empathy and compassion. One cannot watch “Human Flow” without being moved by it. That’s the purpose of art, I feel, to reach people viscerally, to get at them where mere news accounts can’t reach.

After this latest episode of bathroom flooding, I wrote in my journal:

“I know very well that things could be so much worse. I could be a homeless, stateless refugee living, however temporarily, in a flimsy tent on the border between the country I was escaping and the country that was barring my entry. I could be cold and wet in weather that won’t stop raining, unable to wash clothes or bedding in clean water and hang them in the sun to dry because there’s no available clean water, no line to hang them on, and not even a glimmer of sunshine.

“I could be feeling adrift, rejected, sick and shivering, waiting for the kindness and empathy of foreign strangers who speak a different language and adhere to different religious beliefs, but knowing full well that those strangers may never come….”

Those of us who sleep in clean, warm, dry beds in countries that embrace us – whether our countries of origin or our adopted countries — have a responsibility, I believe, to feel and demonstrate compassion for the many millions of our fellow human beings who are suffering in such dire straits. We must look reality in the face and do whatever is within our power and talents to become part of a global solution. Seeing “Human Flow” may well be a good first step in that direction.

Note: “Human Flow” will be shown here in SMA on Thursday, August 16th at 5 pm at El Sindicato Cultural Center (Recreo 4), sponsored by Caminamos Juntos; a discussion of the film will follow.

Also: I highly recommend two new nonfiction books about the refugee crisis in Greece – Kim Malcolm’s A Country Within, and Sallie Latch’s Hear Me.