It’s been a while since I wrote a book review for WOW on the subject of aging. So when I saw the intriguing piece last month in “Books of the Times” by Dwight Garner (New York Times, November 6, 2017), titled “A Frisky Debate Between Friends About Growing Old,” I thought the book in question, Aging Thoughtfully: Conversations about Retirement, Romance, Wrinkles, & Regret, by Martha C. Nussbaum and Saul Levmore, might be of value to my WOW readership.

I contacted the book’s publisher, Oxford University Press, requested a review copy, received it in the mail, and read the book this week. 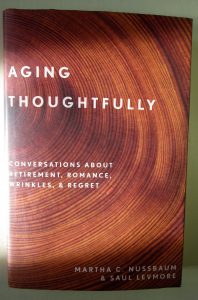 Garner faults the book’s title (not catchy enough), cover (“unappealing”), and its entire first half (filled with “academic throat-clearing”). But, he says, just as he was “about to gently drop this book behind my couch” something happened. “It began to get not just good but very good. The tone warmed; the arguments grew sharper.”

I agree with Garner on all but the second half. For me, the only arguments that grew sharper were mine with the authors.

First, a synopsis:  Nussbaum and Levmore, distinguished professors and colleagues at the University of Chicago – she in philosophy and he in law and economics – and both in their sixties, have each contributed eight erudite essays here, which are paired like a back-and-forth conversation and structured as eight chapters: Learning from King Lear, Retirement Policy, Aging with Friends, Aging Bodies, Looking Back, Romance and Sex beyond Middle Age, Inequality and an Aging Population, and Giving It Away.

They come at these topics, ranging from romance to wrinkles, from rather different perspectives, as you’d expect from a philosopher and lawyer-economist. Sometimes their essays appear to duel, but at other times they harmonize as though in a duet.

At all times, it seemed to me, their writing is so ivory-tower-lofty, so self-congratulatory (“lucky for me!”), and so out of touch with the reality on the ground (where I and my cohort of retired older women live) that the book feels devoid of any practical, down-to-earth value. At one point (and this was the point when I, like Garner, was tempted to “drop the book behind my couch”) Nussbaum chirps:

“Like all American academics of my generation, I have been rescued from a horrible fate by the sheer accident of time. At sixty-nine, I am still happily teaching and writing, with no plan for retirement, because the United States has done away with compulsory retirement. Luckily for me, too, the law changed long enough ago that I never even had to anticipate compulsory retirement or to think of myself as a person who would be on the shelf at sixty-five, whether I liked it or not.”

Reading this, as someone who taught at the college level for ten years as an adjunct professor, earning little more than minimum wage and zero benefits (and someone who is normally mild-mannered and peaceable), I wanted to smack her.

I agree with Garner that Levmore (known throughout the book’s “conversation” as just “Saul”), “is at home with statistical and fiscal argument,” which to my mind is cold and bloodless. Nussbaum (“Martha” throughout), on the other hand, “loses her way,” Garner says, when she approaches her topics “through the lengthy parsing of works like Richard Strauss’s opera ‘Der Rosenkavalier’ or Eugene O’Neill’s ‘Long Day’s Journey into Night.’ These sections devolve into tedious plot summary.”

She also spends pages and pages and PAGES (six, to be exact) on King Lear, seemingly oblivious to her impatient readers begging, And the relevance to me is? (How academics can bloviate!)

But Martha and Saul are honest. They recognize that they are both comfortable older people – that is to say, quite financially secure — writing for those in their own comfort zone, which is the top tier:

“Most of this book is about people who are affluent enough to think about retiring at the right age, leaving wealth to children in disparate financial circumstances, and improving physical appearances with injections and surgery, but there are many aging people who struggle to survive,” they admit.

So their Chapter 7, toward the end of the book, like an afterthought, addresses “the elderly poor” – a label that, by the numbers, I and my cohort qualify for, but one I (we?) find beneath condescending.

Poor? I, and my fellow single and divorced older American women friends who have retired to Mexico because we can afford to live here on our Social Security and meager savings, feel RICH – rich in integrity, creativity, resilience, and independence. Someone should write a book about us, I think to myself. But it would never be published by the likes of Oxford University Press and reviewed in “Books of the Times,” so who would learn of it?

Essays, by their nature, are meant to be thought-provoking. They’re not supposed to be the last word on any subject; but rather, ideally, one writer’s point of view, part of a larger, thoughtful, ongoing conversation. In this respect I hope that Aging Thoughtfully succeeds.