Others may have been surprised, but I wasn’t at all surprised when I read the report in the New York Times (October 4, 2017) that the Las Vegas gunman’s live-in girlfriend had had no idea he’d been stockpiling weapons and ammunition well in advance of the carnage he wrought on October 1st.

In her first public comments since the shooting, she said, “It never occurred to me in any way whatsoever that he was planning violence against anyone.” She’d never thought that her “kind, caring, quiet” boyfriend was capable of what he did – killing 58 people and wounding more than 500 others at an outdoor concert from the thirty-second floor of his Las Vegas hotel room – before killing himself. He had sent her off two weeks before that fateful Sunday night to visit her family in the Philippines, which only made her worry that he was trying to break up with her.

Call me cynical, but I believe that many (too many) women live in ignorance of what “their man” is doing – or is capable of doing. Such women are either too young to know what’s going on; or too naïve or trusting to think to ask questions or raise doubts; or are from another culture and speak a different language; or are too terrified of learning the truth because their world, as they’ve known it, would surely fall apart. Most of us women have known – or have been – one of these women. 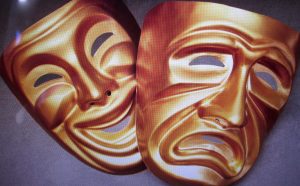 I learned about such duplicity early. I must have been preschool-age. My big brother was in grammar school, and my younger sister was asleep in her crib upstairs. The telephone rang in our living room, and my pretty, vivacious young mom, whom I followed like a shadow, answered it gaily:

“Hello-oooo!” She almost sang the word. I recorded her side of the conversation in my memory for all time:

“No, he isn’t here right now. … Where is he? Well, he’s on a business trip. He’ll be back in a few days. Who’s calling, please? … Oh. You’re calling from his office? … I’m afraid I don’t understand. … He told me he was going on a business trip to Ohio. He always travels to Ohio on business. You should know that. …”

She seemed genuinely perplexed. I wasn’t. Perhaps she was too blinded by her puppy-like adoration of him – he was so tall, handsome, charming and witty in those days — to see him as dispassionately as I could. I had lost respect for him after watching him too often belittle her at the dinner table, calling her such names as “skinny” and “ugly.” I knew instinctively, even at the age of four, that he was capable of leading a double life.

It’s been my observation over the years – years I’ve spent as a divorcee who has seen men in all settings (including, when I was young and newly divorced, my good friends’ husbands attempting to grope me when my friends’ heads were turned) — that many (not ALL, of course, but many) men enjoy leading double lives.

They might behave one way with the wife and kids (sober, upstanding, and reliable, like grownup altar boys, perhaps) and another way altogether with the-girlfriend [or boyfriend]-on-the-side (silly, fun-loving, and young again, as if romping on a playground). They like such arrangements, for as long as they can make them last. They perfect their dual (and dueling) roles. Their duplicity gives them a thrill.

Or perhaps, I’ve thought at times, men like this are simply innately duplicitous. Perhaps they can’t help it, they’re wired this way. Chalk it up to raging testosterone. Or mental illness.

The Las Vegas shooter’s girlfriend claims ignorance. I heard one TV commentator remark, “She was obviously in denial.” But are these valid defenses? It seems to me that we women must be smarter than that. We must strive to go through our lives with both eyes wide open — and both feet on the ground, supporting our own weight — even when we’re in love.

We owe it to ourselves and to our wider communities to see the men in our lives WHOLE and to call out any danger signs we might detect. Ignorance is not bliss. Ignorance has the potential to become extremely harmful. Denial can turn deadly.