Give a bunch of little kids some old socks in various colors, some slabs of felt, balls of crazy yarn, sheets of thin cardboard, and bottles of silicone glue, then stand back to watch magic happen. That’s what I did this past Wednesday afternoon at Ojala Niños.

I’ve written before about Ojala Niños, the nonprofit organization with daily free classes for children of all ages in the rural indigenous community of San Miguel Viejo, on the outskirts of San Miguel de Allende, Mexico, where I now live. (See WOW post “Hope for the Niños,” published March 19, 2016). As Elsmarie Norby, who created Ojala ten years ago, says, “We are a place for learning – with space, materials, ideas, and guidance to foster critical thinking and self-confidence” in the children. And, I would add, creativity.

This Wednesday the kids – nearly forty in all, I estimated – learned how to make sock puppets with materials — and prototype puppets — generously donated by Robin MacKenzie, a part-time resident of San Miguel from Michigan who has dedicated herself to doing all she can to help her community, wherever she may be.

I never met Robin, but when she learned through the San Miguel grapevine of my interest in puppets, she bequeathed her puppet-making gear to me (delivered to me by our mutual friend Toni Roberts) before she left again for Michigan.

This is how the “old girls” network seems to work here in San Miguel. Almost every woman I know is somehow, some way involved in good works, as though in an effort to express their deep gratitude to the Mexican people who have so kindly embraced us all. It’s almost as if a large percentage of the American retirees here have found a new calling by unofficially joining the U.S. Peace Corps and giving back to our host country. It’s a beautiful, reciprocal thing.

But back to the puppet-making at Ojala…

Most of the boys – no surprise! – chose to make sock puppet DRAGONS. The little girls – also no surprise – chose to make kinder, cuter creatures, such as feathery little birds and pink puppies. Butterfly-shaped cardboard cutouts glued into the toes of the socks became mouths that opened; felt cutouts in various shapes became eyes, teeth, ears – and dragons’ scary tongues; and, of course, yarn became hair. The silicone glue worked its magic. 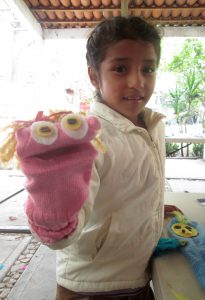 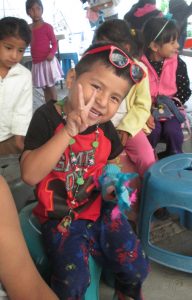 In less than two hours, with some guidance from teachers’ assistants, each of the more than three dozen kids had made a unique sock puppet to keep and to animate. Then came the ad-libbed puppet show in the makeshift theater in the center of the play area.

It was wild. Unforgettable. But what else would you expect when about twenty ferocious dragon puppets with long, sharp tongues and really mean eyes magically come to life?

If you’d care to contribute to Ojala Ninos in some way, please contact the new director, Susan Williams at susanamontezuma1@yahoo.com or the coordinator, Betty Lopez at bettyblopez@outlook.com. And please be sure to visit Ojala’s website: www.ojala-ninos.org.