My Spanish-language acquisition still proceeds at a glacial pace. Nevertheless, I understood all of the speeches given at this past week’s inauguration of the Peace Pole in Parque Juarez, here in San Miguel de Allende.

The words, whether delivered in English or Spanish, were clear to me and to the seemingly hundreds of people – locals and expats, men, women, and children – who attended: “…Peace…here in San Miguel…in Mexico… and all over the earth… This three-meter-tall pink stone obelisk is a physical reminder that peace must be sought everywhere in the world….”

With the official unveiling of this Peace Pole on August 2, San Miguel de Allende joined roughly 200,000 cities in 194 countries worldwide that have erected similar Peace Poles “in recognition of what can be,” as one of the speakers, Rotary Peace Pole Organizer and cofounder of Camino de la Paz, Tom Schneider, put it. “This pole stands as a silent vigil for peace to prevail on earth,” he said.

Here are some photos from this historic – and peaceful – event:

As children (and adults) carried flags from all the countries of the world and walked around the Peace Pole, the names of those countries were called out one by one, and everyone in the gathering echoed them, punctuating the list every so often with the heartfelt call and response, “Que la paz prevalezca en la tierra!” (May peace prevail on earth!). 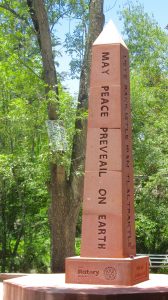 I was, frankly, charmed to see that the word “prevail” on the English side was literally carved in stone incorrectly (“preveail”). Let this be a lesson to me (I thought to myself) – always the editor with the red pencil poised – that Mexicans are supremely tolerant, good-natured, peace-loving, and forgiving people; and I should learn to be too. After all, my Spanish will always leave a lot (such as accuracy) to be desired.

(For more on the history of the Peace Pole Project, see my earlier post, “Digging for Peace,” published July 16th.)