One day, during the decade I was a caterer, cooking instructor, and food writer in New York (’86-’96), I got an inspired idea: I would write a cookbook for singles called Cooking for One. I knew there were thousands – maybe millions! – of us singles living in the City who would benefit from having the skills to cook well for ourselves, rather than resorting to Chinese takeout or a pint of Häagen-Dazs for dinner every night, as so many did.

I was excited. I was on a mission. I thought it through. I wrote a careful, detailed book proposal. I sent it to a number of literary agents in Manhattan. In no time their responses arrived in the mail. To a person, they said in essence: No, thanks! Not for me. Cooking for ONE? Too, too DE-PRESS-ING!

So I had to abandon that idea.

Timing is everything, as we all know. And fame helps a lot too, to be sure — in the book publishing business as elsewhere.

In 2009, about twenty years after I floated my inspired idea, Judith Jones — famous for being Julia Child’s editor, among many other cookbook and literary authors’ editor in her fifty-year career as an editor at Alfred A. Knopf in New York — published her own cookbook, The Pleasures of Cooking for One (Knopf). 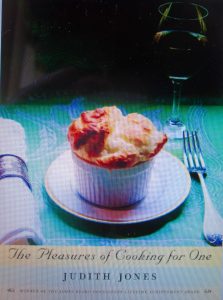 As she writes in her Introduction, “After my husband, Evan, died in 1996, I was not sure that I would ever enjoy preparing a meal for myself and eating it alone. But … I was wrong, and I soon realized that the pleasure that we shared together was something to honor. I found myself at the end of the day looking forward to cooking, making recipes that work for one, and then sitting down and savoring a good meal.”

Over time, in making those recipes “that work for one,” Jones fashioned this gem of a  cookbook. In it she covers the usual categories, of course: poultry, meat, fish, soups, eggs, cheese, veg’s, salads, sauces, rice, pasta, grains, legumes, treats, and sweets (plus “special indulgences”), but with a twist. Knowing the challenges of shopping for one, she suggests ways of repurposing a cut of meat, let’s say, by making an entirely different dish from it the next night or the next (what she calls its second, and sometimes third, round).

Throughout, she also offers gift boxes (boxed copy) filled with tips and tidbits for the single cook – helpful advice and practical suggestions, such as this one:

The single cook is apt to resist buying an avocado because any leftover portion turns brown so quickly when refrigerated. But if you keep the uneaten part intact – that is, leave the skin on and the pit in place – and rub the cut surface with lemon juice, then wrap the piece tightly in plastic wrap, it will keep for several days in the fridge. And a nice avocado always adds interesting flavor and texture, so don’t deny yourself.

Perhaps the prospect of cooking for yourself and eating alone is indeed depressing to young singles in the City who’d much prefer other options. But for older women, especially, who no longer have a family to cook for and who might be tempted to skip “that old chore” in favor of nibbling on this and snacking on that, learning smart strategies for cooking delicious and pleasurable meals for our solo selves may well make for longer, healthier, and happier lives.

Judith Jones died early this month at the age of 93. In her glowing obituary in the New York Times of August 2, I learned this, which I’d never known about her: “She modestly ascribed her success to being in the right place at the right time. Certainly that was true in 1950, when as a young editorial assistant at Doubleday in Paris she rescued the diary of Anne Frank from a pile of rejects and persuaded her superiors to publish it in the United States — a stroke of fortune that gave the English-speaking world the intimate portrait of a forgotten girl, the child everyone had lost in World War II.”

I like to think that writers never really die as long as our words live on in some form. Certainly that’s true of Judith Jones in her wise and wonderful cookbook, The Pleasures of Cooking for One. Jones’s living voice comes through on each page.

So I’ll give her the last word:

“This [cookbook] is for those of you who want to roll up your sleeves and enjoy, from day to day, one of the great satisfactions of life. … I wouldn’t miss this pleasure for anything. And I hope that the strategies and flexible recipes I offer here will encourage you to join in the fun.”