She may be one of the richest and most beautiful women in the world, but I view her as supremely unenviable. She may live in a gloriously gilded penthouse high up on Fifth Avenue, but I see it as a cage.

She may be eviscerated by critics, as I read recently on Facebook (“She married him for money, so she deserves to be miserable!,” one of the countless vicious critics wrote), but I have only empathy for her. Rightly or wrongly, I imagine she feels isolated, lonely, unloved (except by her only child, who is likely, in time, to align himself with his rich and powerful father, as his half-siblings have), misunderstood, deeply unhappy. She’s trapped.

Once upon a time, long, long, ago, I, too was married (briefly) to a man much like her husband, so I know first-hand how privately cruel and abusive such a bully can be. She had, I’m convinced, no idea what she was getting herself in for when she married him, and I’m sure she had little choice in the matter. Men like that take what they want without waiting for answers – throwbacks to Neanderthals dragging women by the hair.

I’ve been thinking about her, high up there in her mid-Manhattan penthouse, a lot this week because I just moved into a new (to me) apartment in the same apartment complex where I’ve been living happily since June, here in San Miguel de Allende, Mexico. My previous apartment, a one-bedroom on the ground floor near the parking lot, was lovely, cozy and bright. But for me this one is even lovelier, cozier, and brighter. It’s a studio apartment on the rooftop (azotea) of this two-story structure. With tongue in cheek, I’m calling it my penthouse.

Well, it almost fits the full dictionary definition – “an apartment on the top floor of a tall building, typically luxuriously fitted and offering fine views” – if you ignore the “tall” and “luxurious” aspects. Actually, for me, the views alone are luxurious enough. From this perch now I can see the Parroquia church in el centro through a now-blooming jacaranda tree: 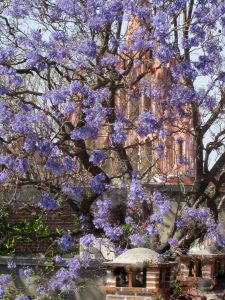 This afternoon, shooting down from my tiny, private patio, I took photos of a joyous, boisterous wedding procession – complete with mojigangas (larger-than-life dancing puppets, costumed as bride and groom) and a marching brass band playing an eclectic mix of lively tunes, including “Roll out the Barrel”: 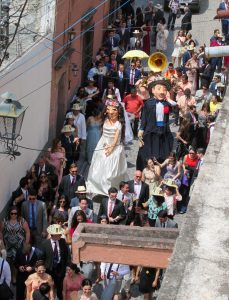 Last night, from my kitchen window over the sink, I could track the climb of the almost-full moon; and later from my front windows I enjoyed a fireworks display in the distance celebrating God-knows-what political or cultural event in sparkling red, green, and white explosions (the colors of Mexico’s flag).

My penthouse patio, which is just large enough to fit a small table and two chairs plus some potted plants – lavender, bougainvillea, rosemary, geraniums, and a few others I have yet to identify by name – adds to the luxury for me. I can be alone there. No one can see me. I can wear my thirty-year-old bikini. I can read, sunbathe, then watch the sun set, sipping a glass of tequila and Fresca (known as a Paloma, to the locals), as I count my many, many blessings. At the top of that long list are: PEACE and FREEDOM.

My penthouse is not gold-plated (thank God); rather, it’s freshly painted in a sunny pale-yellow color that makes me smile. The furniture is old. The fireplace may or may not work (need to check into that). The ceiling is in traditional red brick held in place by strong wooden beams. The dining room table seats two comfortably: 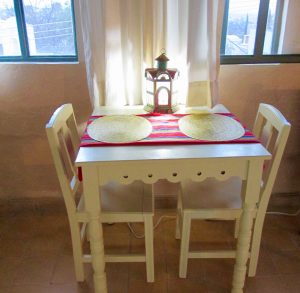 I’ve been thinking of that other woman in her far fancier penthouse because I think, if she could, if she really knew what I have now that she doesn’t, she’d want to trade places with me. But even if she offered me every shiny gold-plated object in the world, I’d refuse.

As an older, presumably wiser, woman now, I’m striving to have compassion for her. I can only hope that over time she will find her own way out of that gilded cage and begin to know what priceless peace and freedom feel like.