Gloria Steinem surprised me. I’d always envisioned her as a crouching lioness with a ferocious roar. For a woman to have had such a big impact on modern history, especially as it relates to women’s lives, I’d assumed her enormous power when seen in person would be intimidating.

Instead, standing at the podium on February 15 as the final keynote speaker of the five-day San Miguel Writers’ Conference in San Miguel de Allende, Mexico, she showed a gentle, self-effacing demeanor and a soft-spokenness that was, in its own powerful way, riveting. The filled-to-capacity audience in the ballroom at the Hotel Real de Minas, about 750 people in all, listened to her talk, titled “Writing Our Way to the Revolution,” transfixed. 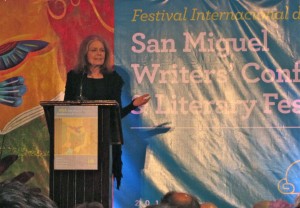 At eighty years old (soon to turn eighty-one, she pointed out), she is slim, tall, and erect (no sign of age-related stooping). Her beautiful, expressive hands, with their long, slender fingers, accompanied her message like a silent chorus. Her ready, broad smile punctuated her points and lit up the room. Her hairstyle was the same as always – parted in the middle and just brushing her shoulders – and even the color was the same (aided by dye, she admitted when an audience member asked her during the Q & A period how she managed to stay so young-looking). “And good genes, I guess,” she said, laughing. I half expected her to add, “This is what eighty looks like.” But (of course) she didn’t do that.

Her words of advice to the audience, made up mostly of writers, was practical and wise. She spoke about why stories are crucial to movements – and how writing and reading about the lives and ideas of the female half of the globe has been, is, and could be a compass into a very different future.

In a small notebook, in the dim light of the ballroom, I jotted down a few quotes:

“Let’s pretend we’re sitting in a big circle,” she began, “and not in this hierarchical [row upon row of chairs facing front] setting. Hierarchy is based on patriarchy, and patriarchy has never worked anywhere in the world.” …

“If it’s going to have roots, a movement must start at the bottom, not at the top.”…

“Writers have the power to make the invisible visible.” …

“The single most important thing is narrative — story. We must tell the truth about our own experience, to contribute to the shared consciousness. Our own stories are important. … We must try to get our authentic voices out there.” …

“I’ve always thought that an army of gray-haired women will one day take over the world.”

She was humorous, humble, gracious, and empathetic. She was, for me, more of an inspiration than ever before.

To view a wonderful 20-minute Vimeo interview with Gloria Steinem made at the San Miguel Writers’ Conference, go to: http://creativecrossroadsofamericas.org/media-2/.

Also: Gloria Steinem has invited stories of the early days of the Women’s Movement from anyone interested in sharing their reminiscences. Submit yours to: mariecochs@gmail.com.