“So you see,” curator Jan Smith said in her introductory remarks last week at the second installment of the 2015 Winter Writers Series event here in Taos, “it’s never too late!” The women writers being featured at this SOMOS (Society of the Muse of the Southwest) reading were Cecil Dawkins, 87, and Sallie Bingham, 78.

Both Cecil and Sallie are lifelong, prolific writers, who, between the two of them, have published five short story collections, more than a dozen plays, nine novels, three collections of poetry, one biography, one family memoir, and four mysteries.

“Just this past summer,” Jan told the large audience gathered in the Harwood Museum auditorium, “Cecil finished writing another novel. And Sallie is completing the final draft of a biography of the philanthropist Doris Duke, to be published by Farrar Strauss next year. So you see, you’re never too old to be a published author!”

Both authors read from their most recently published nonfiction books, which celebrate strong, capable, admirable women. Cecil read from her book, A Woman of the Century: Frances Minerva Nunnery (1898-1997), published by UNM Press.

“I knew Frances from the time she was in her early seventies until she died at the age of ninety-nine,” Cecil said. “I wanted to write her biography because her life story was so unbelievable, just fantastic. She’d try anything. It never occurred to her that she couldn’t do something just because she was a woman.” Using Frances’s own words, drawn from a series of taped interviews, Cecil regaled the audience with the stories of this audacious woman’s exploits and entrepreneurial spirit.

Sallie read from her most recent book, The Blue Box: Three Lives in Letters, published last fall by Sarabande Books.

In my introduction to Sallie’s reading at the event, I said, “Imagine being a writer — a woman who has devoted her entire adult life to writing her truths and telling women’s stories — and one day stumbling upon a big box in your mother’s closet containing the heretofore unknown, unpublished, and unappreciated writings of not only your deceased mother, but her mother, and hers. In uncovering this actual blue box, Sallie discovered that she comes from a long line of women writers who had something important to say about the world in which they lived, and who said it well. From that treasure chest of writings Sallie has fashioned this beautiful book”: 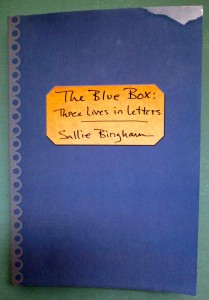 Sallie read from the Afterword of The Blue Box, beginning with these beguiling words:

“A few years ago, on a warm fall evening, I was sitting on the top tier of the ruins at Delphi in Greece. I hadn’t yet read Mary’s [Sallie’s mother’s] letter in the blue box describing that spot eighty years earlier. I did not hear the donkey bells or the wrangling of ‘peasant women’ that had scored the pellucid air during my mother’s visit, but I was blissfully alone, as she had been, although she was missing the man who would become my father.

“In that place, it occurred to me that her greatest gift to me was a passion for writing. …”