Sibyl Saam’s long-awaited novel, Be My Enemy, set in Germany, Japan, and Kansas City – all places where she has lived – will be published sometime this summer, and she couldn’t be happier about it. On a recent beautiful afternoon at my sister Pam’s home in Santa Fe, I met Pam’s good friend Sibyl for the first time and spoke with her about her happy news.

“I consider myself both an artist and a writer,” Sybil, 86, said. “I’ve always loved painting, but I do more writing now.”

Sibyl started writing her novel in her mid-sixties, when the materials she was using in her art began giving her severe migraines. After having overcome various obstacles and dealt with some setbacks along the way, she says, “I’ve finally reached the point where I’ve finished it, and I feel good about it. I really sweated over this book, and now it’s done!” She smiles broadly.

Several short chapters from Sibyl’s forthcoming novel, plus a number of examples of her artwork, have already been published in the collection, Writing at Time’s Edge, produced by members of her writing group at El Castillo, the independent senior living community in the heart of downtown Santa Fe, where Sibyl has lived for the past two years. Sibyl took part in a book signing for this collective effort at Collected Works, one of Santa Fe’s premier bookstores, in early June. 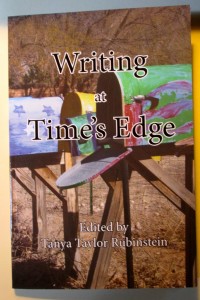 Born in Stuttgart, Germany, Sibyl came to the U.S. in the 1930s at the age of nine with her family. They settled in the Midwest, where she grew up and received her education. Later, when her husband’s career took them overseas, Sibyl lived in Japan for a number of years. Back in the States, after her husband’s death, she was living alone in an isolated area in New Mexico and had suffered a few serious falls, so her three sons convinced her to move to a better place.

“I told them that the only place I would go would be El Castillo in Santa Fe, where I now am. It’s turned out to be wonderful for me. I have a very nice little apartment there; the people are warm and friendly, and I’ve made lots of new friends. If you’re going to a retirement community, I can’t imagine a nicer one. We all get very good care there. We get care for life.”

And when I asked what sustains her now, her answer was simply, “Santa Fe.”

“I love living here,” she said. “I don’t think I could live anywhere else. It’s so beautiful, and there’s so much going on, especially in the arts. I’m very happy here.”