Last year at about this time, when I was feverishly pursuing a book project on purposeful aging (which has since morphed into this Wow Factor blog, with the narrower focus of wise older women), I bought and read and marked-up and dog-eared many fine books on the subject. One of the best of the lot, the one that I would urge all women-of-a-certain age, especially, to read and savor, is the brilliant book Betty Friedan wrote in her later years, The Fountain of Age (Simon & Schuster, 1993).

As most of us will recall, Friedan’s groundbreaking book The Feminine Mystique helped spark the second wave of American feminism in the 20th century. Published in 1963, it described what she called “the problem that has no name” – the insidious beliefs and institutions that undermined women’s confidence in their intellectual capabilities. A 50th anniversary edition of this trailblazing book, which sold millions of copies in the sixties, was published last year because Friedan’s insights into women’s rights continue to inspire.

The Fountain of Age, published thirty years after The Feminine Mystique, seems to me to be less well known but equally important for readers today. The situation she describes in this study of aging, the research she cites, and the attitudes toward aging she observes are still the same, over twenty years after she wrote about them, when she was in her sixties.

As the story goes, Friedan took an Outward Bound wilderness course for persons over 55, and this course became a metaphor for her for searching for “the fountain of age,” rather than the fountain of youth. Through research and hundreds of interviews conducted over a ten-year stretch, she came to describe the “older years” as a new period of life for most people, not a time of deterioration. She believed that in the U.S. the negative images of old age were even “more pernicious and more pervasive” than negative images of women. 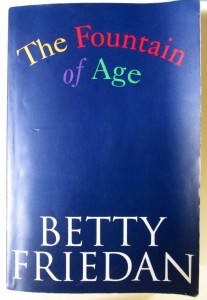 Betty Friedan died in 2006 at the age of 85, but her wise and timeless words about aging live on in this book. To choose a representative passage out of over 600 pages filled with wisdom is certainly a challenge, but I’ll choose this one because in it you can hear the voice of Friedan the intellectual and activist. I hope this selection whets your appetite to read the whole book:

“The movement that flows from the fountain of age cannot be a special interest group. It would be a violation of our own wisdom and generativity to empower ourselves in age only for our own security and care. It would be a denial of the true power of age. As we find and use that power (and we are beginning to do that), all the energy that has been put into denying age, personally and politically – the face-lifts, the false focus on age as ‘problem,’ the warehousing of ‘them’ in Leisure Worlds and retirement homes that profit their promoters and keep us out of sight and participation in society, the ‘care’ that profits its providers and prolongs pain but cannot prevent death – all that energy and generativity can and must be put to work, alongside the young and middle generations, to solve the new problems facing our whole society” (p. 635).