In a famous little town in the lower Rockies known for its high concentration of artistic talent, winning first prize in a competitive art contest is certainly a noteworthy achievement. That’s exactly what artist Sara Jean Gray, 83, did last year when her work entitled “My Inner Child” won the top award in the Taos Center for the Arts’ annual Self Portrait Show.

And this isn’t the first such award Sara Jean has won. Loving to draw since she was a child, she studied art at the University of Colorado and the University of Wisconsin, as well as at the Art Institute in Chicago, where she grew up and later raised her family. During her years in Chicago her talents took her in several directions: she worked as a writer in Public Relations and freelance journalism, she earned a degree in Anthropology, and she had her artwork displayed in group and one-woman shows.

When she and Gene, her husband of 58 years, decided to settle in Taos in 2001, Sara Jean gravitated to art classes at the UNM branch here, where she quickly made friends with fellow-artists. An outgrowth of one of those classes is the Taos Book Arts Group, to which she still belongs. This group meets once a month for an informal “show and tell” session.

“Making art books is such a satisfying way to put in concrete form experiences and ideas that are meaningful to me,” she told me recently over tea at my place, as she displayed two of her masterful, accordion-like, handmade books. “It’s a great way to make an experience visible and tangible. The members of the group work differently. Some go for gorgeous. Some don’t use words at all. Each of us plays and experiments and, well, follows her muse.” 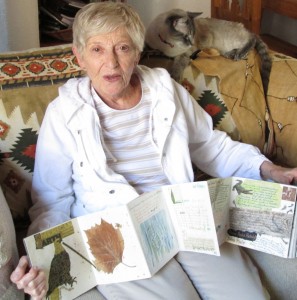 The group has about 25 members now and is open to beginners – anyone, Sara Jean said, who is interested in free-form intellectual and artistic development.

Besides making books, Sara Jean loves to read them too, and she belongs to two book groups that meet regularly. There’s the one she refers to as “the minis,” a five-member women’s group that meets for breakfast once a month to discuss a chosen book. And then there’s the couples group that jokingly calls itself “the eaters club that reads,” that meets for a potluck dinner and book discussion monthly.

For the past five years Sara Jean has also been active with the Taos Archeological Society, introducing the treasures of Northern New Mexico to local school children. She was one of the docents who led tours of the petroglyphs on trails at the Mesa Prieta Petroglyph Project in Velarde, New Mexico.

When our conversation turned to her legacy, she spoke of her three children, now grown.

“They are my pebbles in the pond,” she said proudly. “They are good friends – and I don’t mean just to me. They are good citizens. They do good works. They make the world a better place in so many ways.”

And what advice, I asked her, would she give to young women today?

“Well, I would have to echo Joseph Campbell,” she said, “and say, ‘Follow your bliss!’ You have to do what you love to do. You just can’t do something that you don’t love. “