When I read in the New York Times the other day that the beautiful Academy Award-winning actress Susan Sarandon, now 67, has been cast in recent years in movie roles of “characters who are dowdy, deranged and emphatically old,” my mind slammed on its brakes. Nothing against Sarandon or her professional choices, my concern was: Who decides how older women in our culture are portrayed?

Sarandon’s latest is the road-trip comedy “Tammy,” in which she wears a short, tightly coiffed gray wig and fake feet – complete with swollen ankles – to play a hard-drinking, man-chasing “weirdo” grandma. The antithesis, it seems to me, of a wise-woman role model. This is funny?

Reading this article I was reminded of a piece in the Times last fall cataloguing the then-current TV series that featured older characters as the butt of jokes. “Somehow, it seems,” Neil Genzlinger, the article’s author wrote, “the TV gods have decided that characters old enough to have adult children need to be vulgar, inappropriate or moronic. Or all three.”

As I wrote in an Op-Ed piece for The Taos News at the time, this is not a laughing matter. The TV/movie/media gods, knowingly or not, can only do harm by using their proven-effective powers of mass indoctrination to compound the negative stereotype of older people as bumbling fools. When a culture discounts, dismisses, and disrespects its elders, as these media depictions suggest, the whole society suffers. 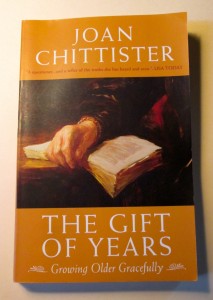 In the chapter “Ageism” in Joan Chittister’s inspired and inspiring book, The Gift of Years (BlueBridge Press, NY, 2008) – a book that has done more than any other that I’ve read to irrevocably alter for the better my attitude toward aging — Chittister writes:

“All the old jokes about old people are fast wearing thin now. Ageism is a lie. The only way to counter it, however, is to refuse to allow it to taint our own lives. Age is not a thing to be pitied, to apologize for, to fear, to resist, to see as a sign of doom. Only the old can make age a bright and vibrant place to be. And so we must. If we don’t, we stand to waste a full twenty-five to thirty percent of our lives. And waste is always a pity” (p. 25).

Ignorant stereotypes and cruel “isms” (ageism, racism, sexism…) have no place in an intelligent person’s world. We elders who care have a responsibility to stand up, speak up, and continue to strive to make a positive contribution to our society and become the wise role models it needs.